Snow and ice control is one of the most demanding activities performed by New York State Thruway Authority staff, and our goal is to maintain safe driving conditions throughout winter storms along all parts of the 570-mile Thruway system. In order to respond as quickly as possible to winter weather, all Thruway maintenance locations are staffed 24/7 during the winter months.

The Authority's four Divisions, New York, Albany, Syracuse and Buffalo, are tasked with the operational response to winter weather events. Within each division are the Authority’s 21 maintenance sections which are responsible for snow and ice operations covering approximately 30 centerline miles of roadway, as well as the accompanying interchanges, service areas and related facilities.

In addition to the plow trucks, each location also has other ancillary equipment such as front-end loaders and snow blowers. These units are stationed strategically across the system and relocated as forecasts and conditions dictate.

Snow plows travel at about 35 miles per hour — which in many cases is slower than the posted speed limit — in order to ensure that salt being dispersed stays in the driving lanes and does not scatter off the roadways. The safest place for motorists is well behind the snow plows where the roadway is clear and salted.

Each large plow truck in the Thruway Authority's fleet is equipped with an enhanced Global Positioning Device (GPS) which allows for real-time monitoring during plowing operations, including route tracking, air and pavement temperature and deicing material application rates for each truck engaged in storm response. The system also reports pavement and air temperature conditions via on-board sensors, provides advanced reporting that highlights when each roadway section is serviced, and illustrates when plow trucks are actively engaged in snow removing operations.

The use of Closed Circuit Television (CCTV) cameras at interchanges and other key locations also provide real-time operational assessments.

The Thruway Authority's primary method to fight roadway icing is rock salt. The average annual usage for the past 10 years is 182,884 tons. The Authority’s 41 storage locations provide for the secure covered storage of 133,030 tons of salt. Sheds are filled prior to the start of winter and salt is reordered as usage occurs throughout the season. In addition to rock salt, the Authority utilizes salt brine and a magnesium chloride-brine mixture in both an anti-icing application and as a pre-treatment for the rock salt. Magnesium chloride is utilized to improve effectiveness at lower temperatures.

In 2018, the Thruway Authority added a new salt shed in Buffalo, bringing the total number of salt sheds up to 63, at 41 different locations across the entire system.

The Thruway Authority monitors and responds to weather conditions in collaboration with multiple state and local agencies.

The Thruway Statewide Operations Center (TSOC), housed at the Authority's Administrative Headquarters in Albany, is the central location for the coordination of all traffic incident response, emergency management, and dissemination of traveler information along the entire Thruway. TSOC operates 24 hours a day, 7 days a week, 365 days a year. The Authority exchanges traffic and Intelligent Transportation Systems (ITS) data with the New York State Department of Transportation through the Regional Traffic Operation Centers, providing the public with a view of traffic operations across New York State so they may make more informed travel choices.

Information is provided to TSOC through a range of systems including:

In preparation of a specific event, the Thruway Authority coordinates with state and local agencies.

Thruway Authority Division Operation Centers (DOCs) and the Headquarters Operation Center (HQOC) are activated during a significant storm upon direction of the Director of Maintenance and Operations. The DOC is in contact with the Maintenance and Traffic supervisors during winter weather, who are traveling the roadways monitoring conditions and adjusting resources if needed. Staff at the DOC also monitor information from roadway cameras, State Police patrols and updated weather forecasting to adjust resources to meet service levels and impacts of incidents on the roadway. 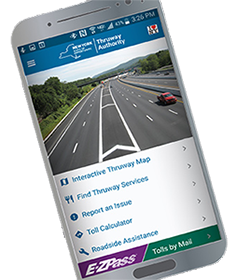